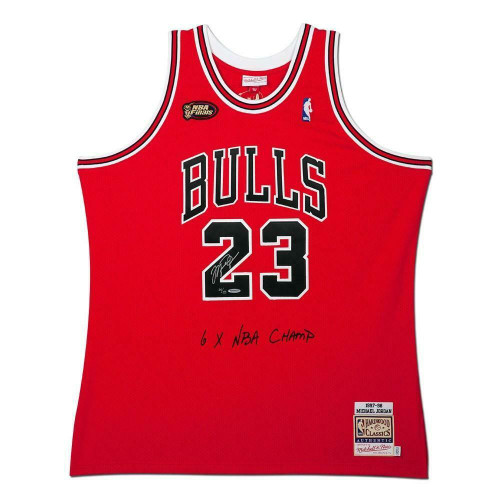 Only nine players in the history of the NBA own more Finals championships than Michael Jordan, and all but one (Robert Horry with seven) were part of the Celtics dynasties of the 1950s and '60s. For those basketball fans that enjoyed the incredible popularity of the league in the decades that followed, the six titles Jordan won are nearly unfathomable. His accomplishment was reached by winning three consecutive championships twice - 1991-93 and 1996-98. While Jordan will always be one of the greatest individual athletes in the history of sport, he is the first to point out the contributions of his many teammates and coaching staff. He will forever be considered one of the finest all-around athletes in history. Always looking to place an original mark on the history of basketball's most iconic items, UDA had Jordan physically write out the inscription "6X Champ" and then got that inscription embroidered directly onto this 1998 NBA Finals patch jersey. Jordan has autographed this limited edition (123) embroidered Chicago Bulls 1997-98 red with NBA Finals patch authentic Mitchell & Ness jersey in silver paint pen. His signature is deemed authentic by virtue of Upper Deck Authenticated's Five-Step Process. This jersey is limited to 123 and you will receive a random number from the edition. Includes certificate of authenticity and hologram from Upper Deck Authenticated. This signature is guaranteed authentic through the Upper Deck hologram system.
×