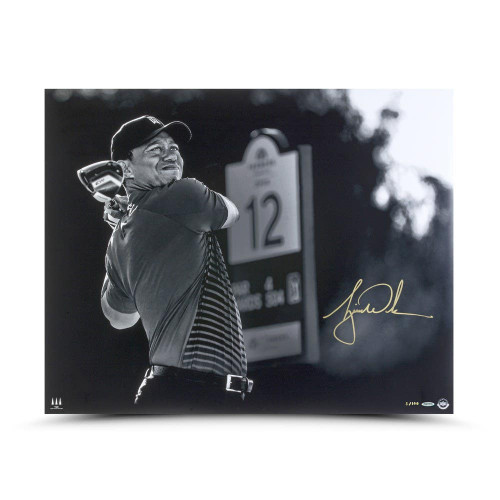 Player:
Tiger Woods
Product Type:
Photo
Features:
Autographed
Edition:
Limited Edition
Authenticator:
UpperDeck
Tiger Woods has autographed this limited edition (100) “Gold Drive” 24” x 30” designed image in gold paint pen. His signature is deemed authentic by virtue of Upper Deck Authenticated’s Five-Step Process. After a 2019 season that saw him capture his fifth Masters Tournament championship while also tying Sam Snead for the most career PGA Tour victories at 82, Tiger Woods is set to continue to make history in 2020 and beyond. He’s already one of the greatest to ever swing a club, but recent years have shown that he still has the ability and desire to win the biggest tournaments. His victory in the inaugural ZOZO CHAMPIONSHIP in Japan at the end of the 2019 season tied him with Snead for the all-time wins record, a mark he fully intends to break soon. This image shows the classic powerful follow through on a tee shot from the 12th hole during the final round of the 2018 Farmers Insurance Open at Torrey Pines South on 1/28/18.
×