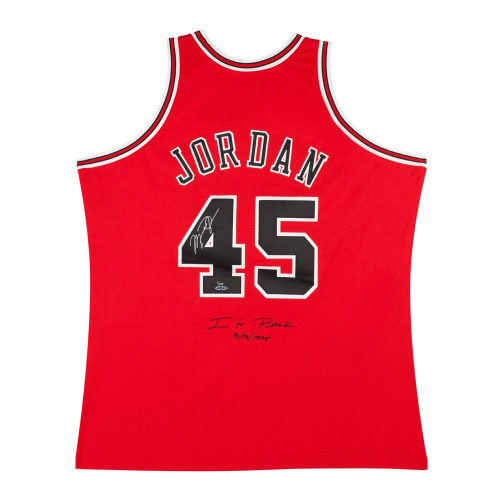 Michael Jordan Autographed & Embroidered 1995 Chicago Bulls #45 Red Authentic Mitchell & Ness Jersey. Press releases are often boring and way too long. The business manager of Michael Jordan changed that on March 18, 1995. Following an introductory paragraph, attorney and agent David Falk introduced two words that came directly from Jordan: "I'm Back." The resulting pandemonium was the stuff novels are made of. The sports world was turned upside down with the return of the greatest athlete of all time. Jordan had retired at the top of his game on October 6, 1993 to pursue a career in professional baseball. After getting as high as the Double-A Birmingham Barons in the Chicago White Sox organization, Jordan returned to basketball and continued his remarkable athletic story. The next day after the press release, Jordan returned to the court with the Bulls and scored 19 points. Instead of wearing his No. 23, which had been retired by the Bulls, Jordan chose to wear 45, which is the number he wore with the Barons. He wore 45 playing baseball as a kid and went on to wear that number for 22 games that 1995 season before switching back to 23. Upper Deck Authenticated had MJ write out the inscription "I'm Back 3/18/1995" and then embroidered his hand-written inscription onto the jersey. Jordan has autographed this limited edition (145) embroidered 1995 Chicago Bulls #45 red authentic Mitchell & Ness jersey in silver paint pen. His signature is deemed authentic by virtue of Upper Deck Authenticated's Five-Step Process. This jersey is limited to 145 and you will receive number "23" from that edition. Includes certificate of authenticity and hologram! Jordan's signature is guaranteed authentic through the Upper Deck Authenticated serial numbered hologram system.
×