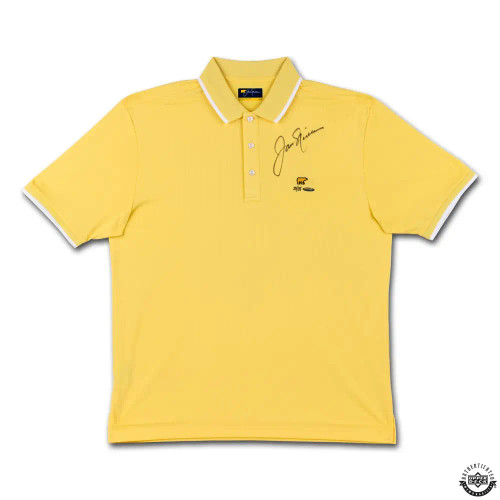 Player:
Jack Nicklaus
League:
Golf
Authenticator:
Upper Deck
Product Type:
Shirt
If you follow golf at all you know that Jack Nicklaus is the major championship record holder with 18, a mark that will most likely never be broken. But what many people don’t realize is that Jack finished in second place in a major tournament an amazing 19 times. He was a third-place finisher nine times. Those 18 titles could have very easily been in the high 20s with a few rolls here and there. Among his 18 major wins were six Masters Tournament victories, five PGA Championship trophies, four U.S. Open wins and three titles in The Open. Not content to settle down upon his retirement from full-time play on the PGA Tour, he also captured eight Champions Tour titles from 1990-96. It’s hard to argue he isn’t among the greatest athletes of all time. Nicklaus has autographed this limited edition (25) Golden Bear yellow polo in black paint pen. His signature is deemed authentic by virtue of Upper Deck Authenticated’s Five-Step Process.
×