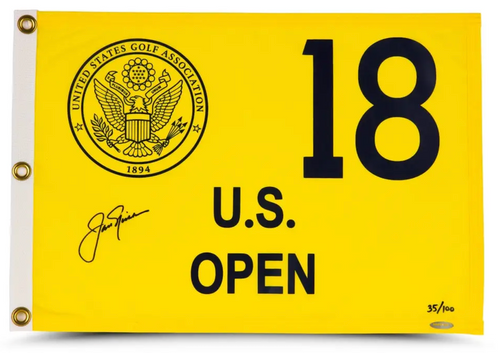 Player:
Jack Nicklaus
Product Type:
Flag
Features:
Autographed
Authenticator:
Upper Deck Authenticated
Not only did Jack Nicklaus win the 1980 U.S. Open, he did so with the dramatic flair he was so well known for. Not only did he shoot an opening-round 63, he set a tournament scoring record with a 272. And he not only won his fourth U.S. Open title, he did so after most people thought he?d never win another major championship after turning 40. His victory came at Baltusrol Golf Club in Springfield, New Jersey. Nicklaus would win the PGA Championship two months later, and would go on to win his 18th and final major at the Masters Tournament in 1986. Nicklaus has autographed this limited edition (100) 1980 U.S. Open pin flag in black paint pen. His signature is deemed authentic by virtue of Upper Deck Authenticated?s Five-Step Process. You will receive a random number from the edition. Includes certificate of authenticity and hologram! Jack's signature is guaranteed authentic through the Upper Deck Authenticated serial numbered hologram system.
×